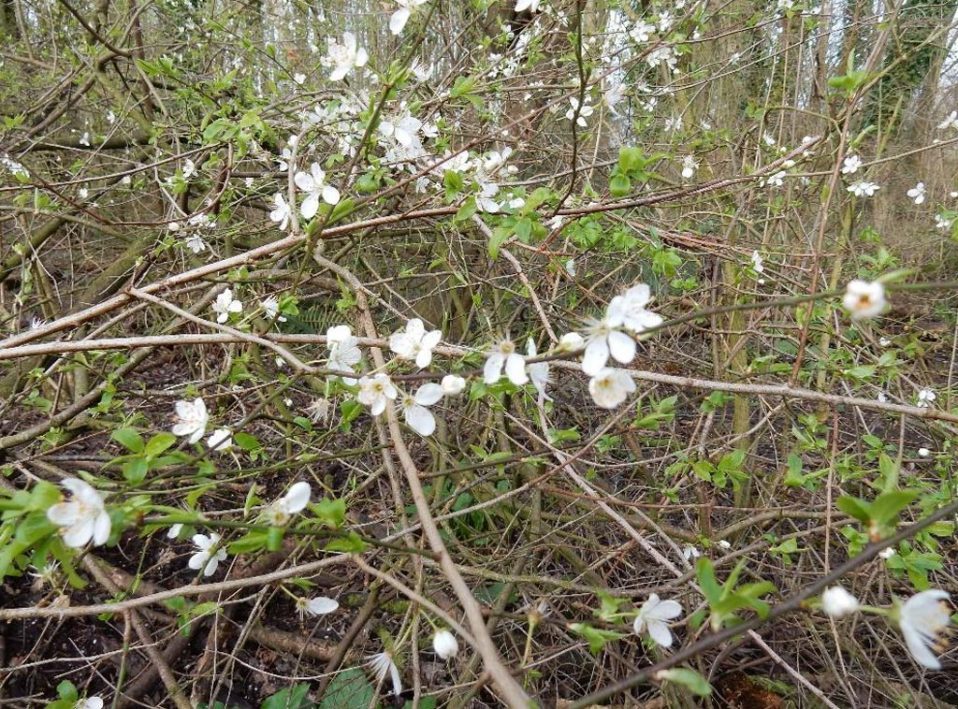 Early in the New Year the glades at Westwood and Horrocks Flash were strimmed, to clear bramble, and other unwanted vegetation which would compromise this habitat. The cuttings were then gently raked away to leave the covering of moss as little disturbed as possible.

A surprising number of different types of moss and lichen were seen, including the one pictured below, with its bright orange-red fruiting bodies.

Other work has included cutting back the hedges along the path by the school, and cutting the bramble back around Scotmans Loop.

Storms Ciara and Dennis made their presence felt in February, disrupting and delaying planned activities.

One activity which was delayed was the monthly Wetland Bird Survey. This normally takes place on a Sunday, or the nearest available day. In February it had to be delayed until Wednesday, which is very unusual. During the survey all the Flashes are visited, and LWT staff or volunteers stand at designated points counting all the numbers of all the different species visible. It is part of a nationwide survey, with the British Ornithological Trust collecting the data.

The storms and persistent rain also created issues with the paths, making many waterlogged, muddy and needing repair. There has been a particular problem at the back of Ochre Flash, where water drains off the field. This is in spite of the drainage work done by the Council last year, and valiant efforts from volunteers and LWT staff to channel the water away.

Following the storms work was getting back to normal before the Covid 19 virus pandemic meant usual volunteer work parties were cancelled until at least the end of April.

Green-winged Orchids have been introduced onto the Wigan Flashes site. These came from Altcar where there is a strong, but isolated, population. They are being introduced at various sites around the wider area so that the species can be protected from loss if any one habitat is compromised.

A lot of planning and work has gone on to make the merger as smooth as possible, and I’m sure we all wish them well.

The Easter Children’s Event had to be cancelled because of the pandemic and the Open Day, which usually takes place early in June, has been postponed.

The Smew was reported again in February on Turners Flash, which was a treat for the bird-watchers.

Numbers of Willow Tits are holding up well. During a recent survey 3 males were heard calling in the area adjoining Scotmans Flash. The Cettis Warblers have also been heard, lots of frog spawn sighted, and an early Brimstone butterfly spotted in March. The earliest blossom was photographed in February; that’s the picture at the start of the Newsletter. Since then all the usual spring blossom and flowers have started to emerge including primrose, oxlip and violets.

Fungi don’t excite everyone, but some do have lovely names. There have been good sightings of ‘Scarlet Elf Cups’, and ‘King Alfred’s Cakes’ as in the pictures on the left. No prizes for guessing which is which.

Plans were made for the involvement of school children in the signage and interpretation improvements to the Ochre Trail, and Moss Bridge to Bryn Marsh Canal path. Unfortunately, their involvement is now difficult because of the school closures due to the virus pandemic. However tender documents for the work on the paths themselves are in preparation.

Work has continued on the latest area to be opened up for coppicing. The ground is being cleared of unwanted vegetation, and plants needed for coppicing trimmed to encourage new growth.
In addition, several hazel ‘whips’ were planted in the two areas where coppicing had already commenced.
It is hoped these slender ‘whips’ will survive and flourish.
NB. The Coppice Group meets every third Saturday in the month. Anyone interested in joining the group should contact Helen Bird on 07860438449.

Hope everyone keeps well and safe in these difficult times.

Your ticket for the: April 2020 Newsletter