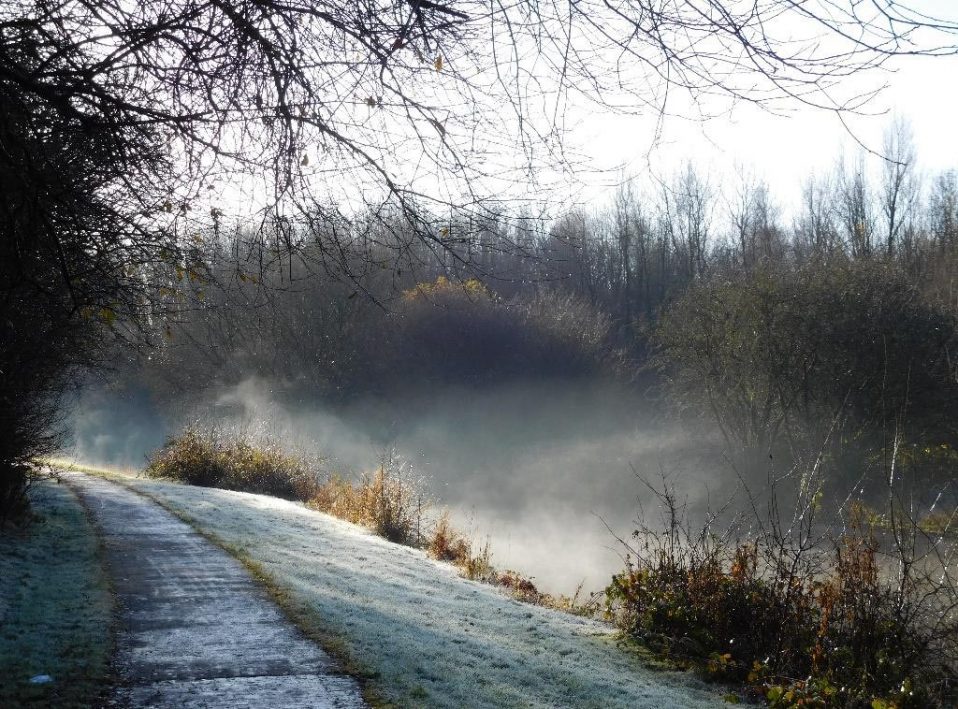 Autumn is usually the time to carry out fen cuts and areas are cut in rotation, to let new growth through. This autumn was very wet, as you will all be aware, and that, and the breakdown of the mower, meant the usual work was delayed. The path from Welham Road to Moss Bridge was flooded for several days.

Another delay caused by the wet weather was the ditching work on Lightshaw Meadows. As you may remember, from the minutes of the AGM in October, this work was made possible because of a grant from Viridor. It was finally completed in the second week of January.

Fortunately, work could commence on the Heathland area, which was so badly burnt in the summer of 2018. Scrub has been removed to encourage the regrowth of heather, which is already having results, as you can see from the picture on the left of heather in flower on a very frosty day.

The glades have been strimmed and raked to maintain their integrity.

In addition, large quantities of American Dogwood have been removed from alongside the ‘Yellow Brick Road’, the path to Turner’s Flash, and from between the meadows adjacent to that path.

American Dogwood is not a native species, as is obvious from the name, and it is not appropriate in a Nature Reserve. A party from the Council’s ‘People Directive’ helped with this on a council volunteering day.

The Halloween Event was successful, with 96 attending, and the weather being kind on the day. A large number of participants successfully passed their broomstick flying tests! £43 was raised from sales of food and £7 in donations. We are once again very grateful to Angela and her family for the catering.
A further £40 was raised from sales of crafts, both on the day and shortly after.

2 pipistrelles were found during bat box checks.
2 bitterns were seen in December, during a regular survey, which is splendid. In addition, a Great White Egret was seen on Horrocks Flash, later moving to Lightshaw Meadows. There have also been recent reports of a smew on Turners Flash.

It was mentioned recently that birds which we were once thrilled to see moving into the Flashes, such as buzzard, we now regard as commonplace and routine! It takes something really new or special for people to feel it worth reporting. Nevertheless, the good recent sightings of birds like kingfisher, great spotted woodpecker, and winter thrushes are still a treat.

With help from the Carbon Landscape Team there have been 2 successful bids for funding, and work will be starting this year on these projects.

You will already know from the minutes of the AGM that there has been a successful bid to National Lottery ‘Awards for All’. This is for new information boards and artwork around the Ochre Trail.
The second successful bid was to the Post-code Lottery. This is for pathway improvements between Moss Bridge and Bryn Marsh, including an art project and interpretation artworks.

Both of the above projects include working with schools on design, and more detailed planning will be starting soon.

The other good news this year is that we have been adopted as a Co-op Local Cause again. All members have already been emailed about this. 1% of what Co-op members spend on selected goods and services is available for local causes. Members can choose which cause they wish to support by going to coop.co.uk/membership and clicking on “Choose your local Cause”.
We won’t know how much money is available to us until the end of the Local Cause year next Autumn, but we hope to be able to repair a large section of the path from Welham Road to Moss Bridge.

The Coppice Group continues to meet every third Saturday in the month. A new area is currently being opened up. Anyone interested in joining the group should contact Helen Bird on 07860438449.

A Very Happy New Year to you all.

Your ticket for the: January 2020 Newsletter